Taking an In-Depth Look at Rooibos (aka Red Bush) 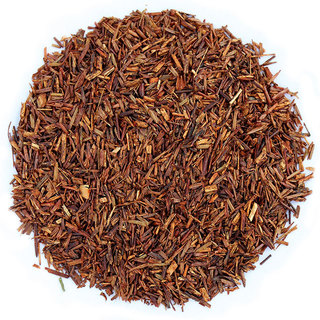 Rooibos is a plant with amazing properties.   A South African native, the leaves of the Rooibos - pronounced Roy-Boss, plant are dried and used to brew a caffeine free drink with high nutritional value.  Here at Stir Tea we are very fond of Rooibos.  We offer you two kinds of pure Rooibos: Red and Green, both organically grown and you will also find it used as a base within many of our herbal and fruit blends which we have listed at the end of this article.

Looking at the Rooibos Plant & Its History

Indigenous to the mountain region of Cederberg (north of Cape Town) Rooibos was first discovered in the 1700s by Dutch settlers to South Africa.  They found that the rooibos plant produced an acceptable alternative to the imported black tea they were used to drinking, however, it wasn't until the late 1930's that red rooibos was grown as a commercial crop and then the late 1990s saw the creation of a new category - green rooibos.  Over time the use of rooibos has extended into the culinary field with powdered rooibos used in cooking, and also as an extract for food and beverage flavouring.  You will also find it in cosmetics and personal care products.

Shrub like in nature the cultivated plants may reach a height of 1.5 metres.  Its botanical name is Aspalathus linearis and the plant has long needle-like leaves, and produces yellow flowers each spring (it reminds me of the NZ broom plant to look at).  From an established seedling it takes around 18 months before the plant is ready to harvest, usually during the summer months.  The plant will deliver around 4 crops over its average life span of 6 years.

Red rooibos is prepared through the traditional process of fermentation.  This involves cutting the green leaves, bruising and then wetting them with water.  The damp leaves are then left to oxidise for 12 hours during which the leaves turn red and  the distinctive flavour develops.  The rooibos is then dried and processed.

Green (or unoxidised) rooibos is harvested, cut and then dried and processed immediately without the oxidation step.  This difference results in a much lighter liquor colour with a mineral/grassy like flavour.

Exploring Rooibos As A Beverage

Red rooibos is the most well-known of the two rooibos beverages, though we sell both varieties in our Herbals and Fruits category. Inhaling the aroma of our dry red rooibos leaf you will be struck by the honey and caramel nature of it.  The brewed liquor is full of depth and the complex flavours remain on the tongue, there can almost be a faint hint of smokiness in the background.

The aroma (and resulting liquor) of the dry green rooibos leaf is more akin to a light green tea.  It has a mellow flavour and more vegetal with a hint of sweetness.  There is no astringency when brewing either style.

If you are interested to learn more about the flavour profiles of rooibos then take a look at the sensory flavour wheel published in the Science Direct, which describes this in more detail.

Rooibos is said to offer many benefits to drinkers, being that it is:

It can also be consumed in many ways; a healthy and refreshing drink in its own right both the green and red are lovely as a hot beverage (the red can stand the addition of milk really well) or it is perfect as an iced rooibos base adding lemon, apple or pineapple juice.  It is an excellent caffeine free way to dilute fruit juices while adding nutritional value and useful in cooking as a base for stews and marinades.

In skincare and household products, you're likely to see it within soaps, body scrubs, moisturisers, room and linen fresheners.

Within the Stir Range of Herbals and Fruits there's something for everyone when it comes to this stunning beverage.  In addition to the pure green and red rooibos options we have included rooibos in the following blends in varying amounts:

We hope you enjoy our rooibos offerings.