Menu
Login Cart
My Account   Shopping Cart   Checkout
>Home >Learn >Articles of Interest >What Plant Based Milk is a Good Alternative to Cow’s Milk in My Black Tea?

What Plant Based Milk is a Good Alternative to Cow’s Milk in My Black Tea? 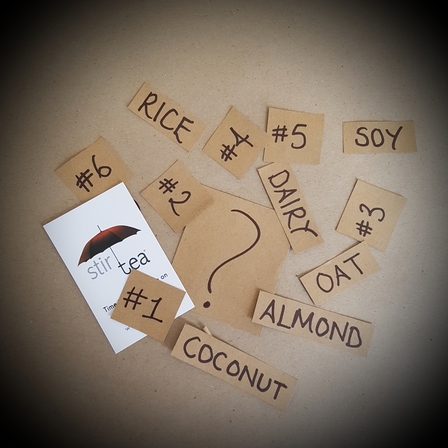 Our Favourite Plant Based Milk Alternatives

This is the order in which the non-dairy milks were ranked for overall taste (with 1 most preferred and 5 least preferred):

** Since publishing this article we have been contacted by a tea lover who has reported great success using cashew nut milk which in their experience did not taint the taste of the tea and provided a creamy texture similar to that of dairy milk.    Unfortunately because cashew nut milk is not readily available off the shelf we haven't been able to test this yet but look forward to doing so.  Let us know what your experience is.

To identify our favourite non-dairy milk to drink in black tea, we followed a set methodology, which is detailed here:

Tests 2 and 3 were done to check for any curdling issues with any of the milks.

All other elements were identical for each brewed cup of tea.

The three members of the group sampled each cup (5 per experiment) and then silently ranked their preferences.  They did not know which milk they were sampling in each cup.

For the dairy drinkers, dairy was still the favoured drink. However for the purpose of looking at dairy alternatives, all three participants in the test unanimously chose Coconut Milk as their favourite non-dairy milk.

Each of these preferences is discussed in more detail below.

Other general observations we made during the experiment included:

With each of the plant based milks, the participants found the colour framed their opinion before tasting the samples. The majority of the plant based milks created a far darker looking tea liquor in appearance. As this experiment was all about taste, we kept the amount of milk added to each cup of tea the same (15mls). However, for day to day use, you may wish to adjust for your own taste.  Had we not been conducting this taste experiment, the preference would have been to add more non-dairy milk to create a similar consistency and colour to regular dairy milk.

For each of the experiments, all milks poured well with no evidence of curdling. We note that this may be because the milk is not shocked by boiling liquid. The tea had the correct time to brew so its serving temperature was not boiling point.  When using chilled milk, both rice and coconut milk did have a small indication of suspension rather than complete mixing of the milk with the water. The recommendation would be to serve these milks closer to room temperature with your tea if they are your desired choice.

We note that the curdling issue may be more noticeable if the percentage of milk you are using in your tea is more than the traditional drinking style measure we tested (a cup of black tea with a small portion of milk).

We found adding the milk first and then pouring the tea over it gave us a better liquor consistency and experience for each of the milk choices.

Our Experiences with Each Milk Type

Here are further details regarding our experiences with each of the non-dairy milks we used:

Interestingly this was the sweetest tasting despite having no added sugar in the milk. Coconut is naturally sweet and this milk allows for a smooth, creamy and slightly sweet tea. The coconut flavour was pleasant but obviously this is only a suitable alternative if you like coconut.

This milk also provided a smooth finish to the tea and the colour was similar to dairy milk when tea was added. No signs of suspension and a well flavoured experience.   It was a very close result between the oat and soy milk option and we considered they were each good alternatives to dairy for tea drinkers

Despite having cane sugar as an ingredient of the soy milk, unlike the coconut milk this did not create a sweet tea. There was a light graininess to the texture however the creaminess of the milk provides a thicker quality as you drink it and the overall experience is pleasant. The colour of the tea is consistent with that of a dairy based tea.

The colour of tea is rather dark and the consistency is quite thin. There was less astringency than with the almond milk however there was no depth to it.  Would recommend 2-3 times the quantity of milk to be added e.g. 30-45 mls.  A very slight suspension was noted when the cold milk was added rather than room temperature milk.

The consistency of this milk within the tea is rather thin and leaves a rather insipid aftertaste in the mouth. There was a decrease in stability of the drink over time as it sat during the experiment there was a slight separation/suspension. Recommendation would be to use an alternative milk. If this is your chosen dairy substitute we would recommend double or triple the quantity of milk e.g 30-45mls.

We'd be keen to learn what your favourite non-dairy based milk is, and if you have tried any of the plant based milks we used in our experiement! Don't be shy: let us know today!