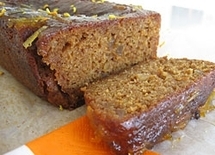 This recipe appeared in Joan Bishop's A Southern Kitchen column in the Otago Daily Times newspaper August 2014. Joan baked it in a ring tin, we also think this would make a wonderful gift made using mini loaf tins and accompanied by a packet of tea. We love the intense ginger flavour in this loaf, the inclusion of yoghurt makes it very moist and a lovely dessert choice also.

***Joan's marmalade recommendation: Choose a fairly tart marmalade with thin slivers of citrus rather than chunks. This gives the citrus elements in the cake and the glaze some subtlety. On her recommendation we used Rose's English Breakfast marmalade.